SciFinder is an entry to research from many scientific disciplines including biomedical sciences, chemistry, biochemistry, engineering, materials science, agricultural science, and more.

Contents on this Page 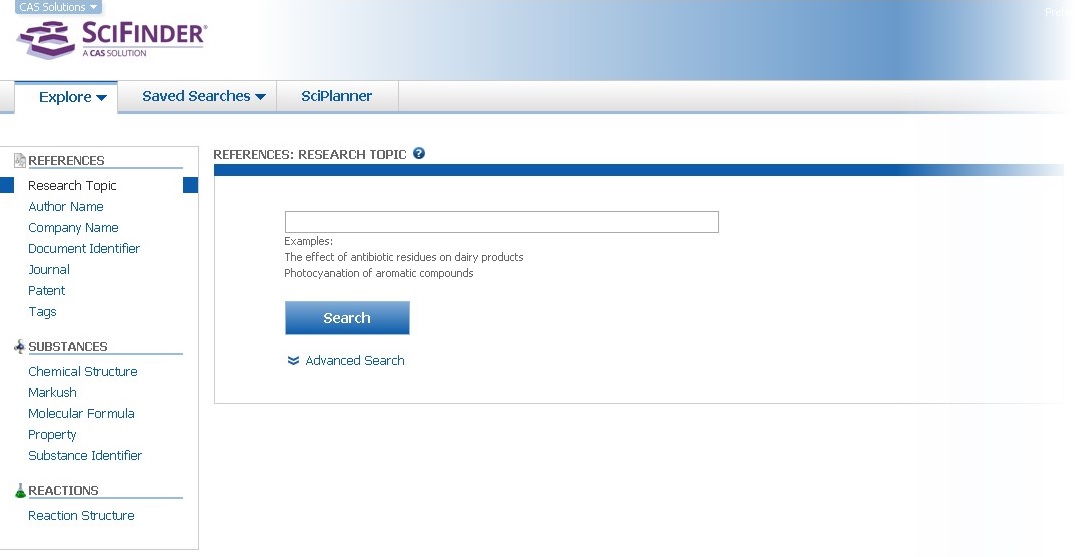 SciFinder® opens to the EXPLORE tab and to a search box allowing you to search for References by Research Topic.  You may also search for references using specific fields.

SciFinder ®expects a query using natural, English language.  Not keywords or, if keywords, then keywords with an expression of relationship between as identified through the use of prepositions and conjunctions.  That said, SciFinder® does not recognize distributed modifiers.  For example, it might be natural to say "liver or nasal apoptosis" but SciFinder® prefers the clarity and specificity of "liver apoptosis or nasal apoptosis."

SciFinder® uses natural-language processing to parse a search query.  Thus, it will attempt to identify the key concepts in the query and then combine these concepts in various ways to provide you with a variety of search results.

There are restrictions when conducting a topic search in SciFinder®:

This research topic may be refined using any of the Advanced Search parameters:  publication date or date ranges, document type(s), language(s), or by author name or company name.  My advice, especially if you are not sure what to expect in the way of results or are not looking for something specific, is to do any refinements to your query AFTER you have retrieved your first results list.  That is, move from the general to the specific in your searching.

SciFinder® allows you to search specifically for references:

You cannot search specifically for a given subject term (or "concept" as it is referred to in SciFinder®).  That said, subject categories are assigned and appear as a linked field within individual records.

Boolean Operators: AND, OR, and NOT

SciFinder® processing does interpret AND and OR included as part of a natural language query as we might expect but if it is not sure, it will execute and show you the results for both kinds of queries.

One SciFinder® trick to note:  in other database resources, we typically use OR to group synonymous terms.  This is not the case in SciFinder®.  Instead, it is recommended that you identify any synonyms (up to three including acronyms) in round brackets following the word in the query. As an example, SciFinder® prefers this search:

Antibiotics used in the treatment of cats (felines)

Antibiotics used in the treatment of (cats OR felines)

the second search using the Boolean "OR."

In the second search, SciFinder® identifies only two concepts to work with:  "antibiotics used" (i.e., concept #1) to be combined with either "treatment" or with "cats" or with "felines" (all being a candidate for concept #2).  In other words, the idea of treatment as being an independent concept is missed.

SciFinder® does accept the use of the Boolean NOT and interprets it as would be expected.  As well, you may also express negation through the use of the word EXCEPT.

Truncation in SciFinder® is done automatically in terms of searching for plural forms, past tense verbs, and other word forms.  Any truncation symbols entered will be ignored.

As noted above, you may choose to limit your search at the point of entering your query by dropping down the advanced search menu.  Alternatively, you can refine your search once you have retrieved your list of references.  SciFinder® offers three ways to do this.

My advice, especially if you are not sure what to expect in the way of results or are not looking for something specific, is to do any refinements to your query AFTER you have retrieved your first results list.  That is, move from the general to the specific in your searching.

By default, the references returned from your search will be sorted by accession number or according to the order they were added to the database, most recent first.  Other options for sorting include: by author, by the number of citing references, by publication year, and by title.

Tutorial:  Introduction to Reference Searching.  (~20 minutes)  You must be logged into SciFinder® for this link to work.